I realized lately, that its actually has been almost a year since my last post here...which doesn't mean that i haven't drawn for that long! I have been working on other projects and didn't really had the time to post stuff here - but thats going to change again.

So the reason, why i'm here now, is that i just came back from Israel. And I took of course a sketchbook with me (even bought a new one!), and I brought a selection of colored pencil (a lot of brown-yellows) and my watercolors, as well as fineliner and my beloved brushpen and pencils. I ended up using only one 0.3 fineliner and a 2B Pencil  - the colored pencils didn't work out, the brushpen didn't flow as usual, the watercolors were too much of a hustle. But on my next journey I will still take all of it with me, since you never know!

Ok, enough with the preparation, lets go to Israel:


By the way, if you want to see more picture of Israel i did, i have been there already some years ago. Here is the post from 2013: Israel in 2013.
Eingestellt von jorisburla um 02:56 Keine Kommentare:

It's been a while...
strangest trees - i used the very warm weather yesterday and discovered a new quarter in Zurich (sketchwise). This is the Corner Luegisland/Herzongmühlestrasse, at the very cityborder - the whole street was lined with these trees.
5.5.2016, pencil. 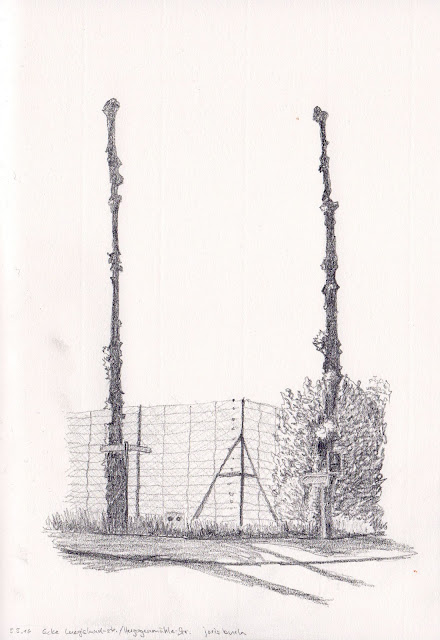 I went to Freiburg with two friends this weekend. While enjoying Freiburg on saturday, we were quite tired on sunday. That's when i took my pen and sketchbook: I drew the first one from the balcony doorstep while the others were still trying to wake and get up. The second one in the evening, while we had a rest at the hostel, before we had to get back to Zurich. 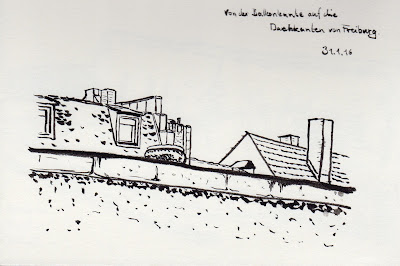 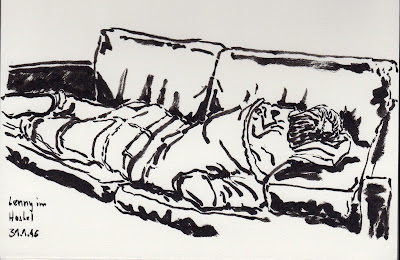 Today was the 50th Sketchcrawl - not my 50th though! It was cold, but sun shone brightly. We were about ten sketchers, which spread out to sketch the Museum Rietberg in Zürich and the surrounding park. Was fun!

Yesterday i've met with some other people from Zurich to do some urban sketching, and since it's still freaking cold outside, we went to the market hall in the "Viadukt". Its warm and one gets hungry because of all the different and tasty looking food. Lots of colors and lots of details didn't made it easier, but also more exciting to sketch though!
Next time I have to go buying my food there instead of sketching...or maybe pay with a sketch?

It has been about four months since my last post here...
I have drawn some sketches since then of course, but i was much too busy to update the blog. Work and the University were the two things i had in the past months in my life. So i was very happy to take a break from the stress and go to Berlin with agood friend. Since it was brutally cold, i couldn't sketch outside, but luckily there are lots of nice bars and cafes, where its warm.

After an day of washing heavy old machines, i was in desperate need of some energy to get me going for the evening. So I bought a coffee at the train station and did some ultra speed sketching: trying to capture the people on the escalator: i could see the persons for approximately 10 seconds, but at the beginning of those from the front, and in the end from above (or the other way around). I stood no chance - but it gave me the energy needed!

jorisburla
Me, thats Joris Burla, from Zurich Switzerland. I study art history, but mostly, I draw. Have fun.